The weather forecast suggested showers on the day of our cleanup in Mill Lane, Carshalton, but even though 31 volunteers came prepared in wet weather gear, barely a drop of rain fell!

At the forefront of our minds was the awareness and avoidance of nesting birds.  Nesting season is March to August but as only one nest had been spotted, everyone was warned of its location, and we gave the area a wide berth.

We decided to tackle the river methodically, with volunteers getting in just downstream from Wilderness Island with a plan to work up to Grove Park, and from the outset an astonishing amount of rubbish was handed over the fence to others waiting expectantly with bin bags and wheelbarrows. 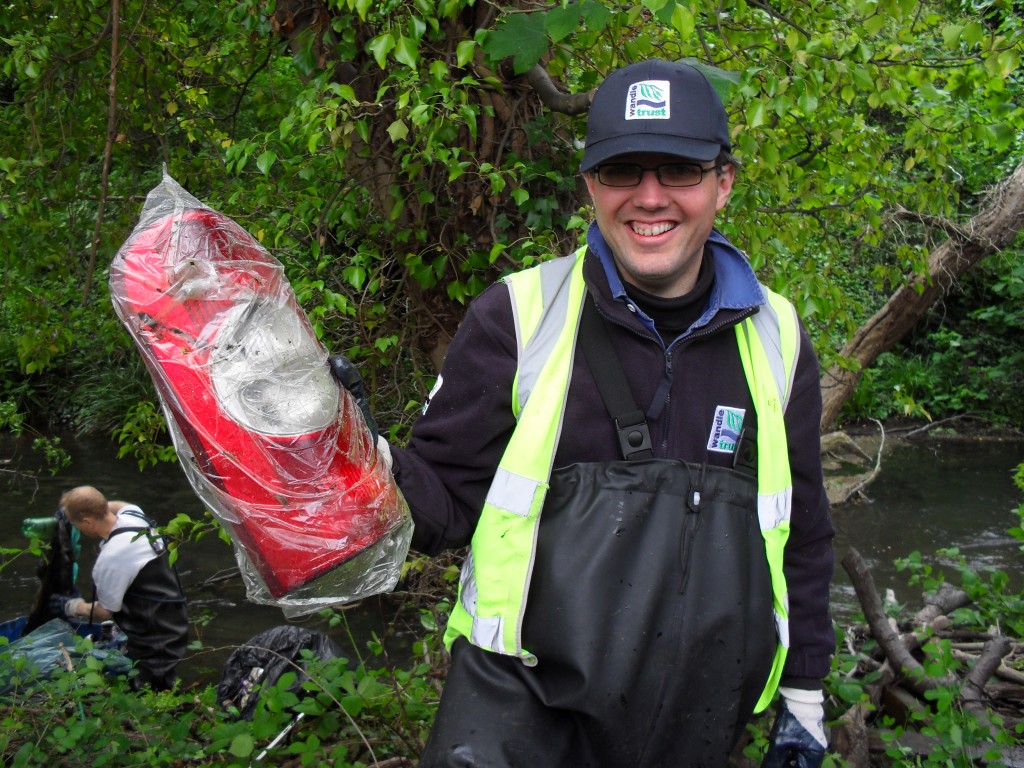 and in the same stretch John found a shock absorber: 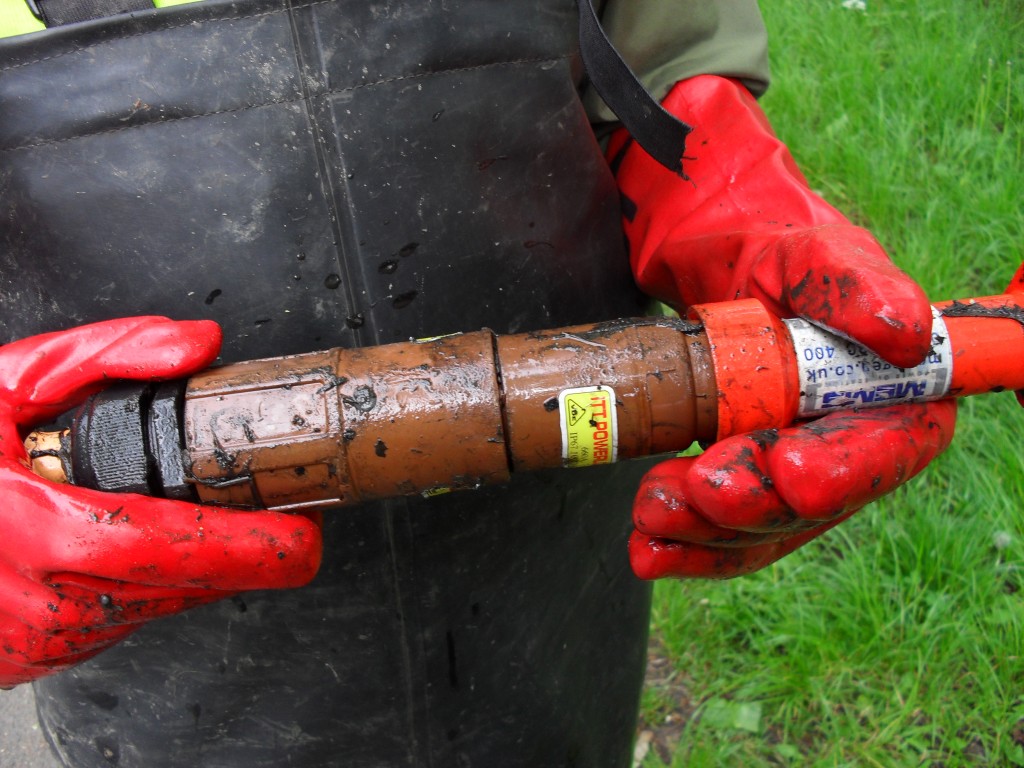 Once the wheelbarrows were full, it was quite a long walk back to the dumpsite, but, our hardy volunteers are used to covering long distances: 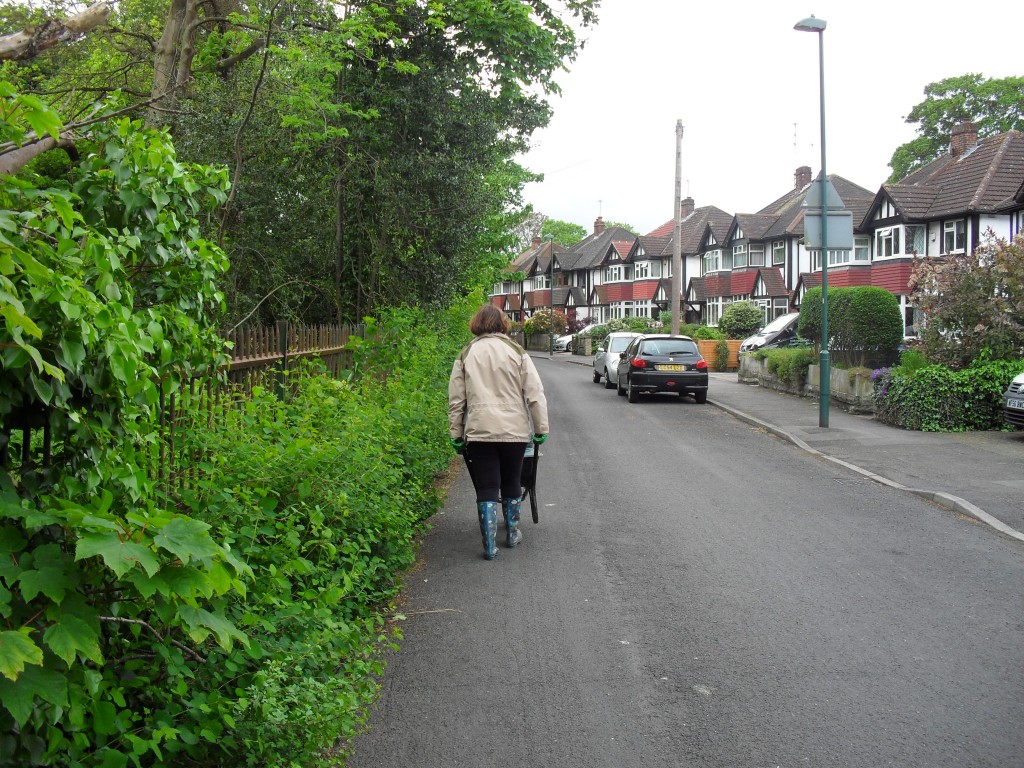 We also agreed that woody debris would remain in the river, but lots of small items had accumulated up against various fallen branches and these required careful extraction.

We had reached the railway bridge by lunch time so everyone congregated round the gazebo and enjoyed tea, coffee and cheese scones, rock cakes with optional jam and a dotty chocolate sponge brought by Ann, Jana and Sally. 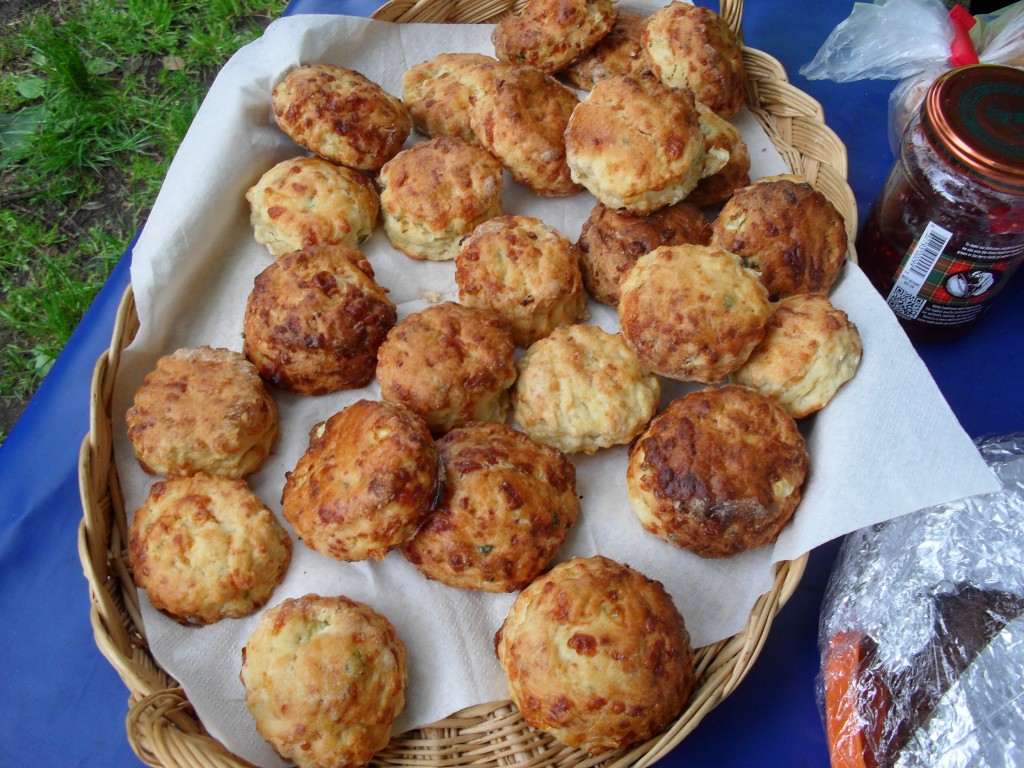 Knowing that we had to get all the way up to the park by 3pm, everyone tucked in and delicious it all was too! 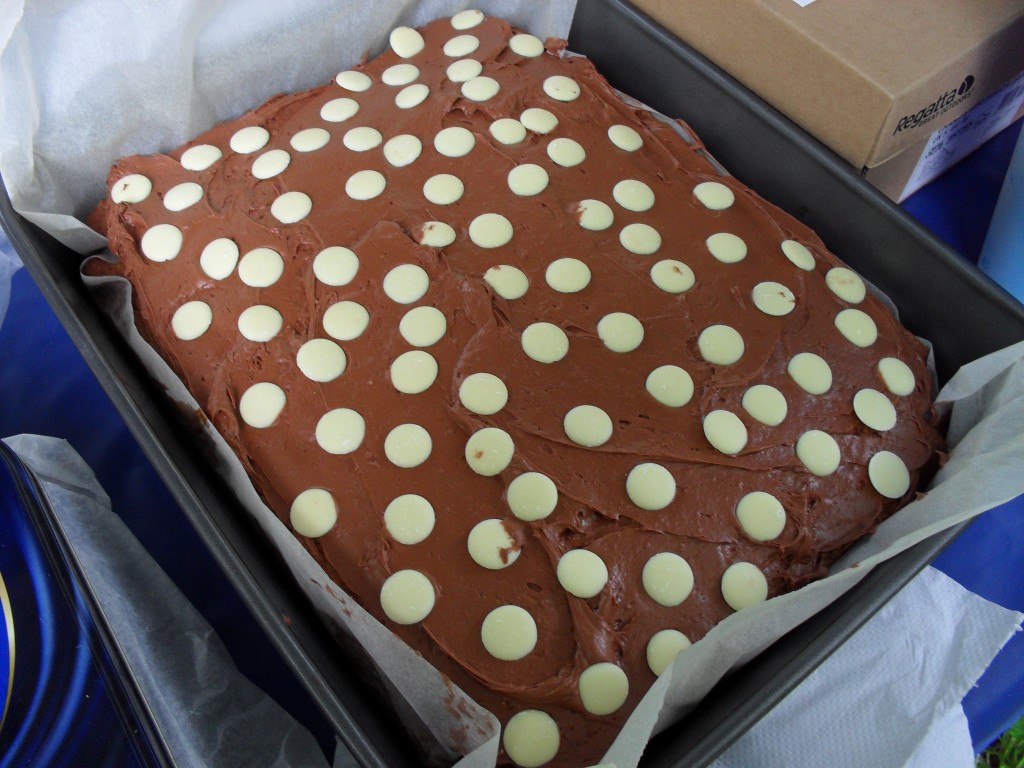 After our refreshment break, Gideon and Per did a brilliant job clearing the fish pass upstream of Butter Hill bridge: 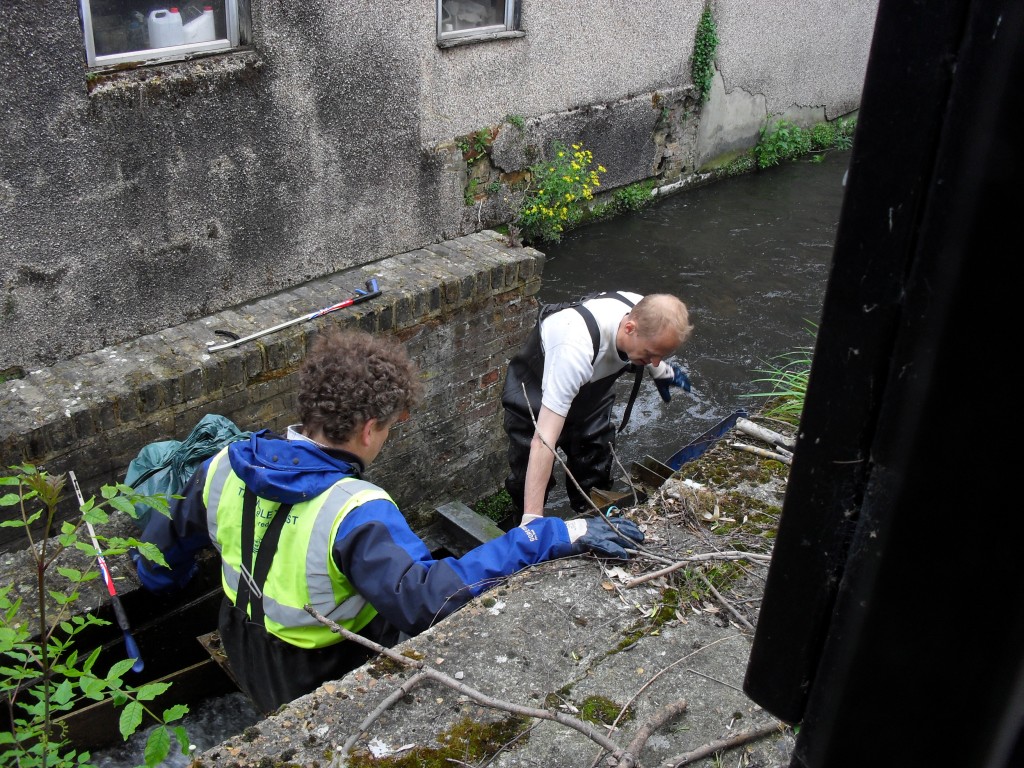 Whilst Tim and Rob utilised lots of muscle power picking up this concrete fence post: 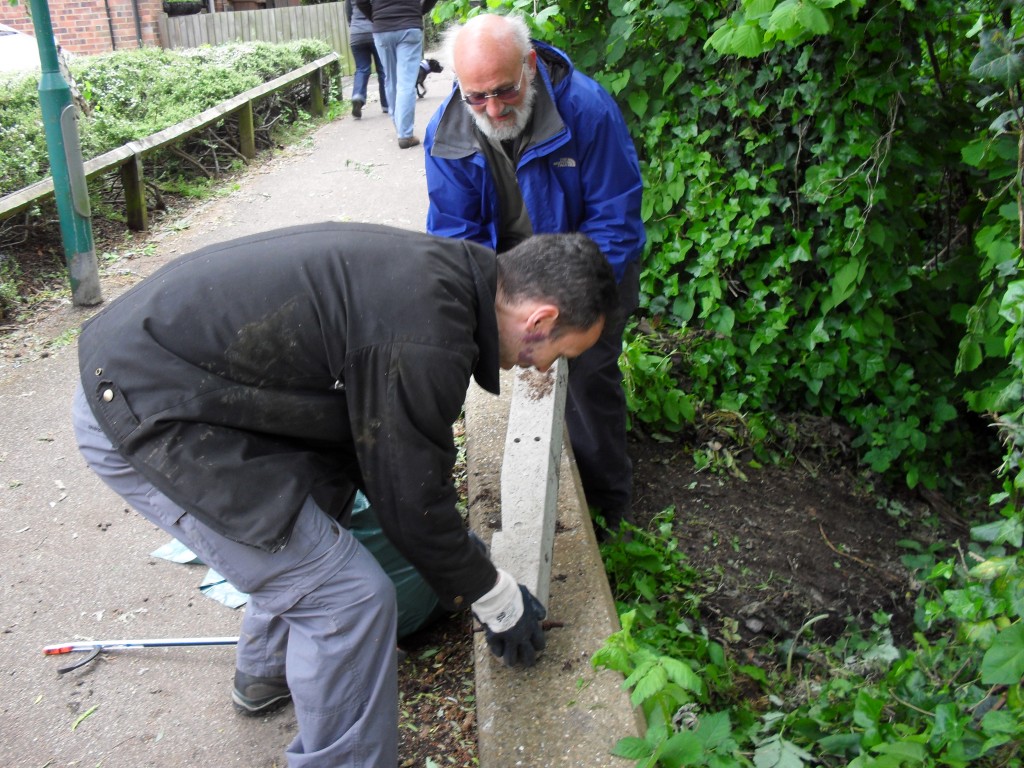 And Joe was delighted to discover an abandoned bike. Although it had been in the water, the wheels still went round so he was able to ride it back to the dumpsite: 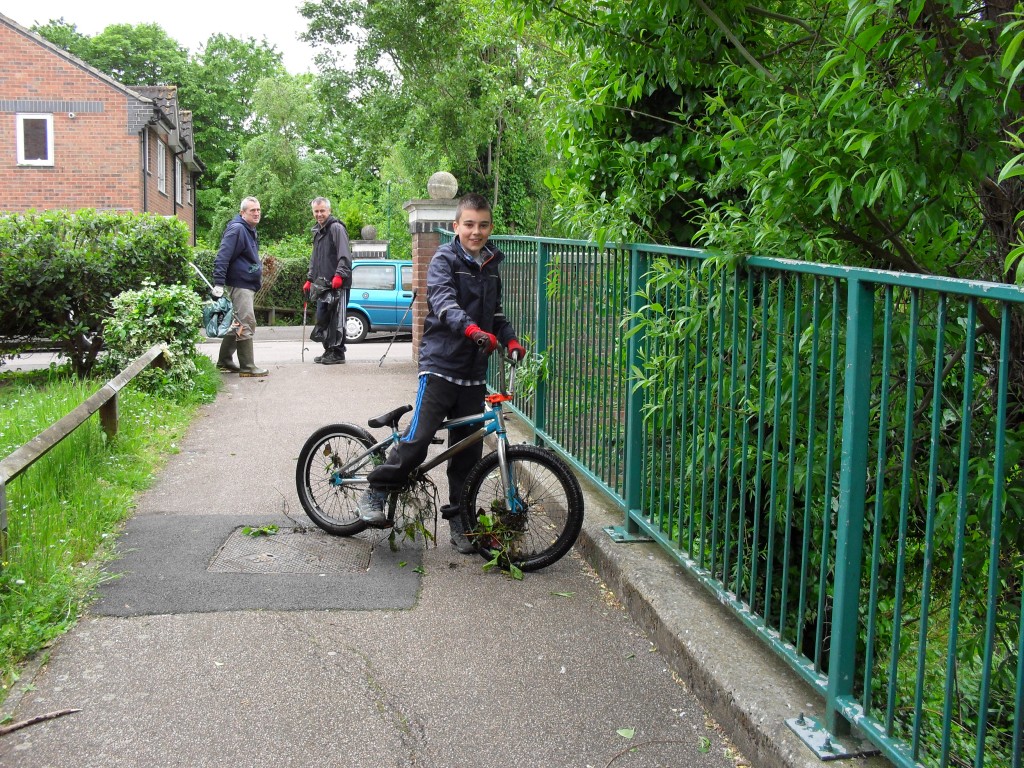 We found a cash box too, but, inevitably, it was empty.

Inspecting the rubbish pile at the end of the cleanup, there were quite a few groan-inducing remarks made about being ‘sold down the river’ 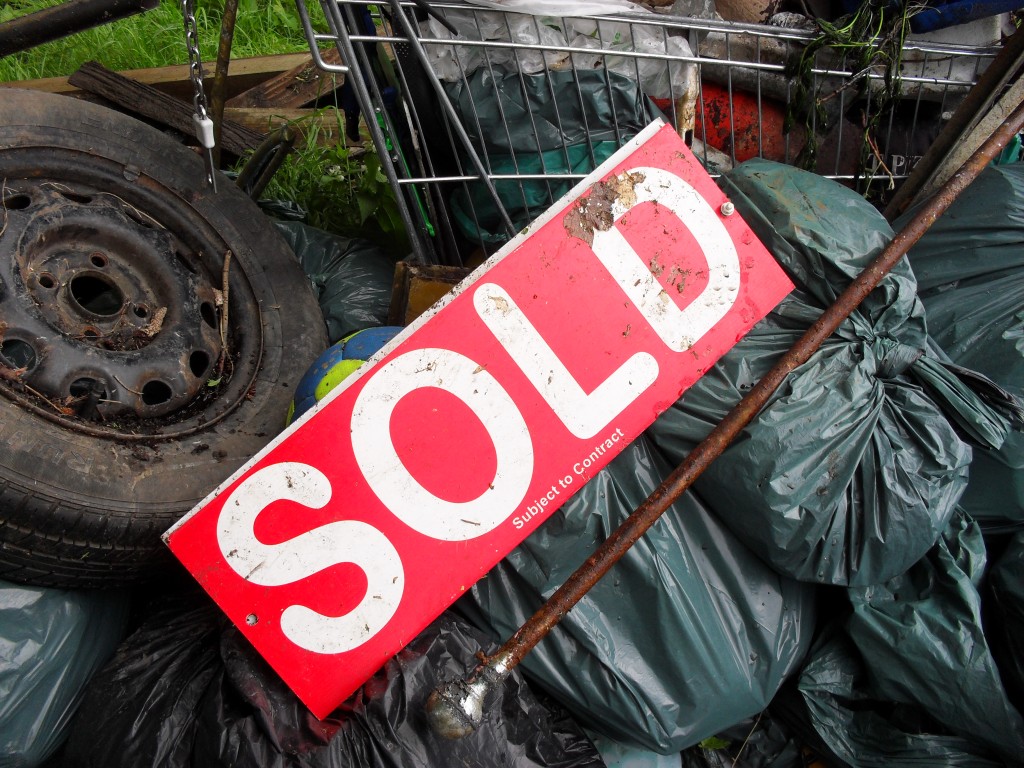 and whether Handel’s ‘water music’ should be played on the keyboard! 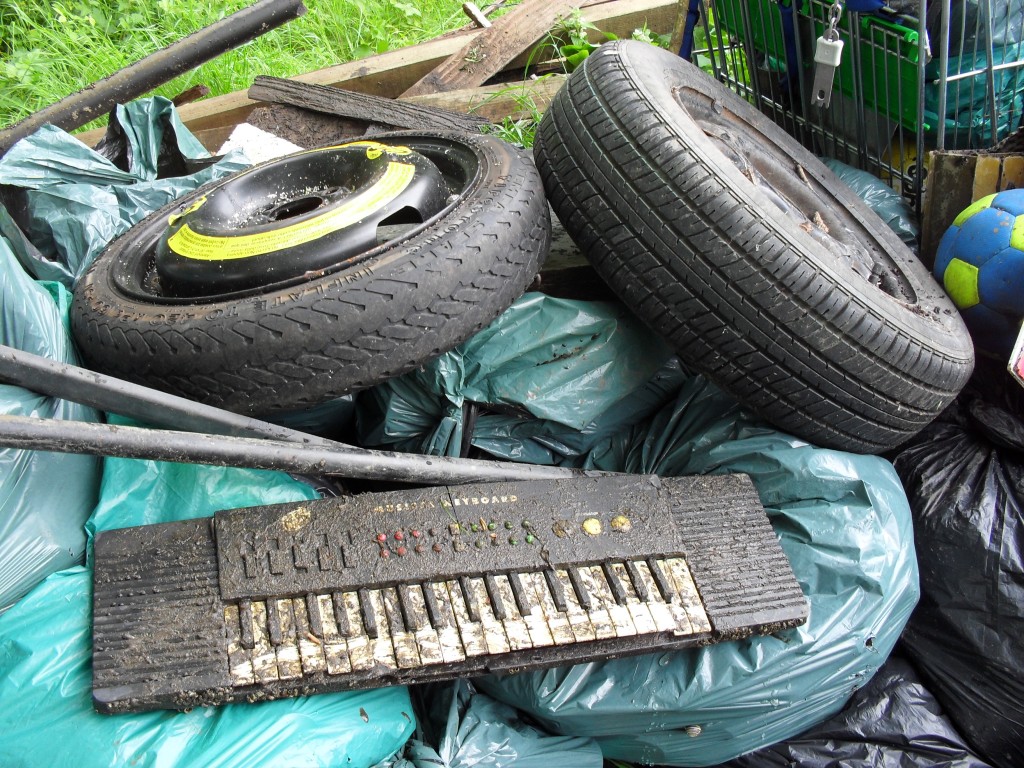 Our thanks to David of Sutton’s Waste Management Team for organising collection of all the rubbish. 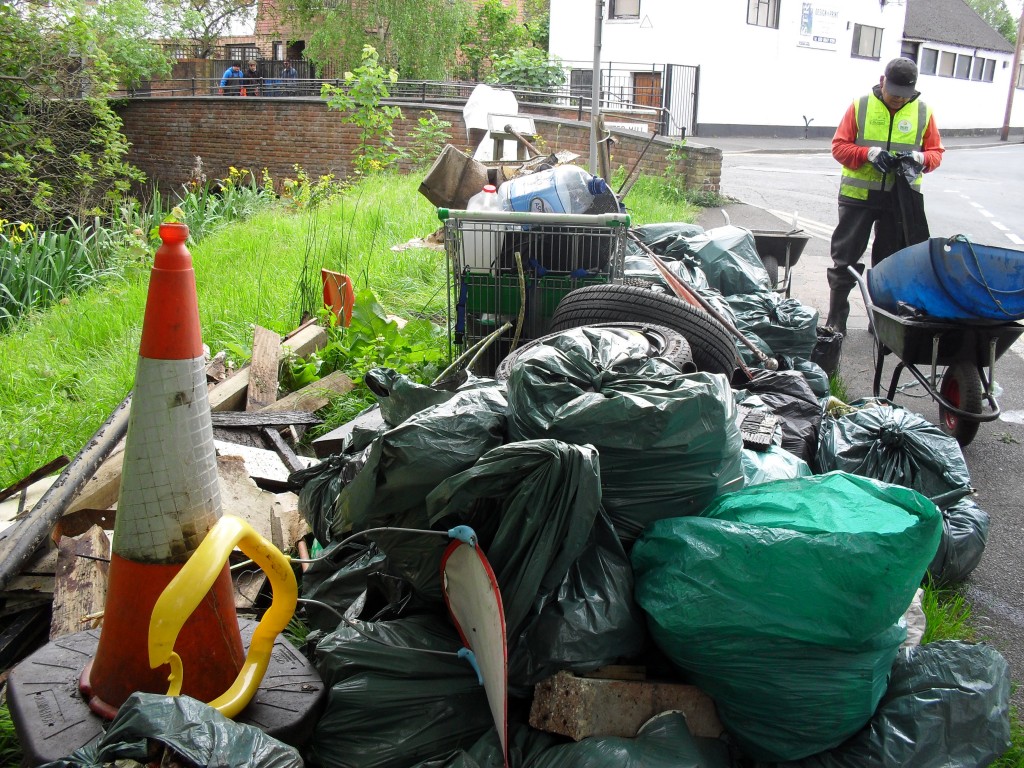 Huge thanks to Gideon who loaded and unloaded the van, to AJ who loaded up the van, and to John who arrived early to help unload at the site and to keep an eye on volunteers.

Wildlife: 1 bullhead in a yoghurt pot which was quickly returned to the river!