The one with the traffic jam

For our May cleanup, we headed to Beddington Park. The event was funded by the Living Wandle Landscape Partnership, a HLF funded scheme all about reconnecting people with the River Wandle.

I arrived an hour and a half early for this event. Why you may ask? Well I was woken up early with a small nightmare about the cleanup. I dreamt that I arrived at the event, unpacked the van and got everything set up myself. At 11 o’clock no volunteers had arrived and instead I get a phone call saying I was in the wrong place, and all the volunteers were waiting the other side of the park!

Luckily on the day, this didn’t happen. 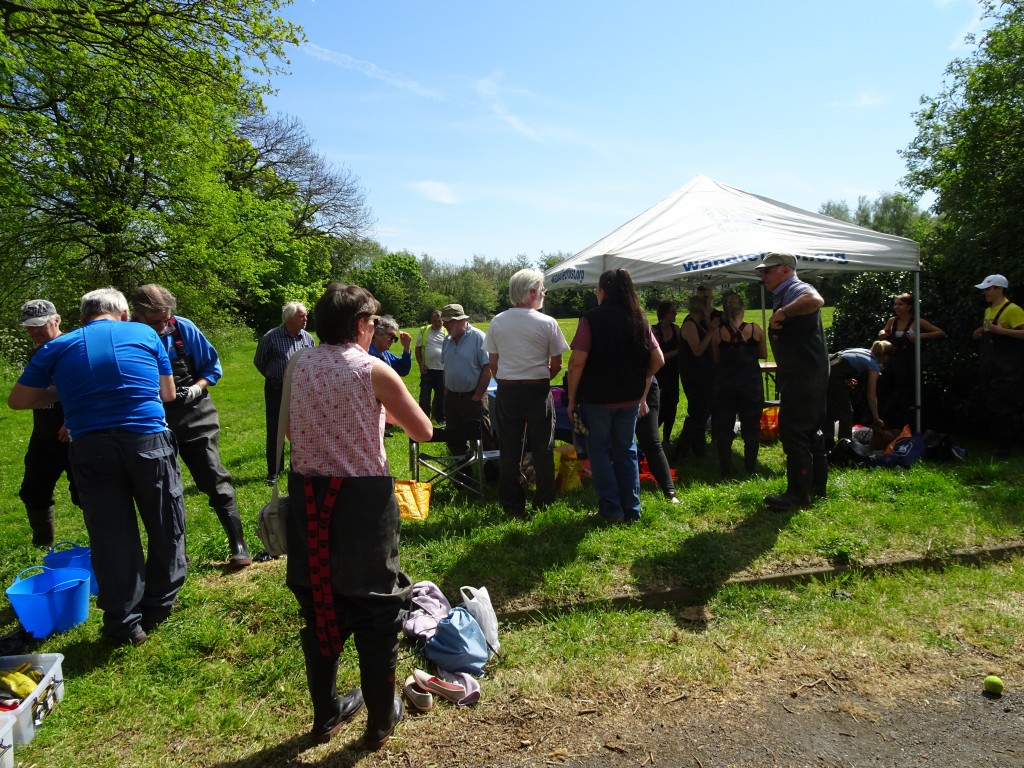 For the day we had two aims: the first was our usual Wandle cleanup, and the second was to tackle invasive Himalayan balsam. In the past we’ve hunted balsam later in the year, when the plant stood high above the nettles with its bright pink flowers. Since we’re now getting closer to eradicating this species from Beddington Park and the upper Wandle, we decided to hit it even earlier in the year. But that did make spotting it slightly harder… 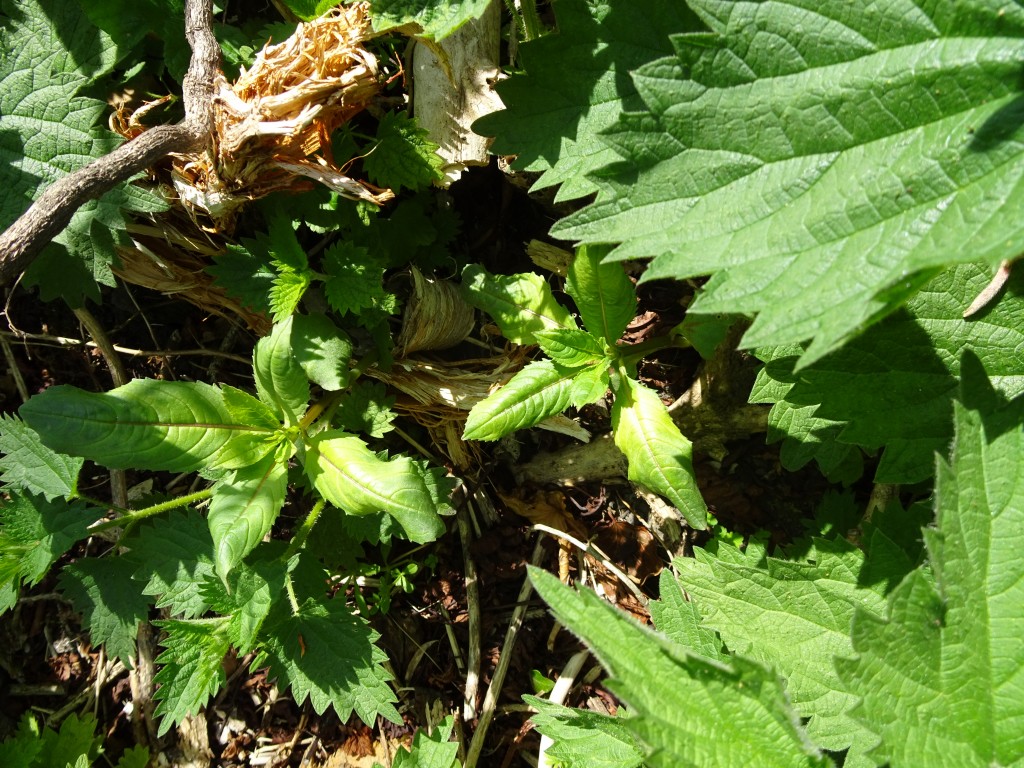 After a welcome talk and Health & Safety briefing we divided into teams. We had a wading team which went off into the Wandle to start removing rubbish, we had a bank support team to ferry the rubbish to the pile, a litter picking team around the park and two balsam pulling teams headed up by Theo Pike and Alan Martin.

As our Invasive Species Officer, Alan had surveyed the whole park ahead of the event and mapped where the small balsam plants could be found. But as they were only small, our volunteers needed a keen eye. 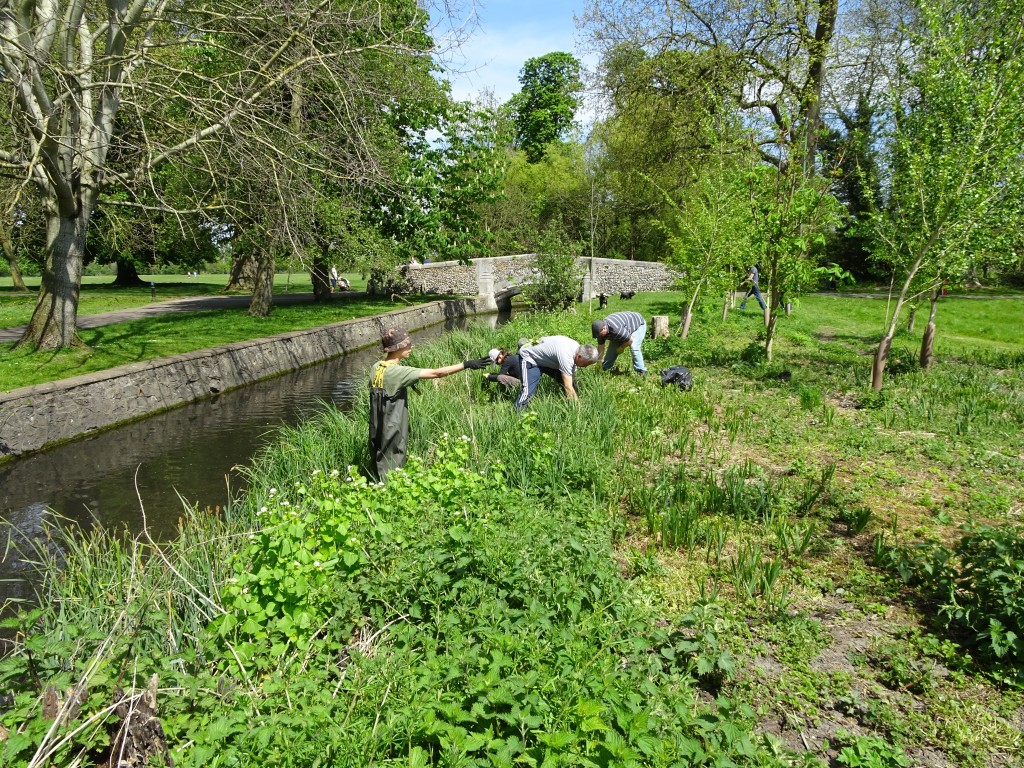 Meanwhile, our waders had already discovered a trolley! 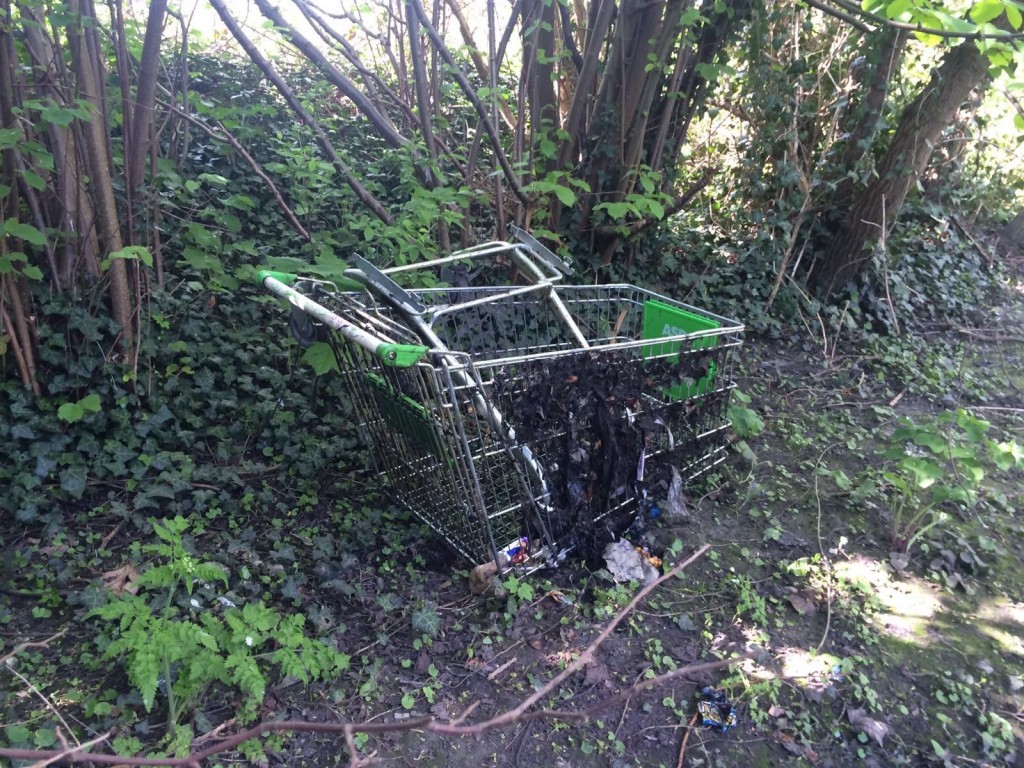 Keeping an eye on the waders involved some getting past some extensive greenery on the sides of the banks, something we don’t have a problem with in winter. 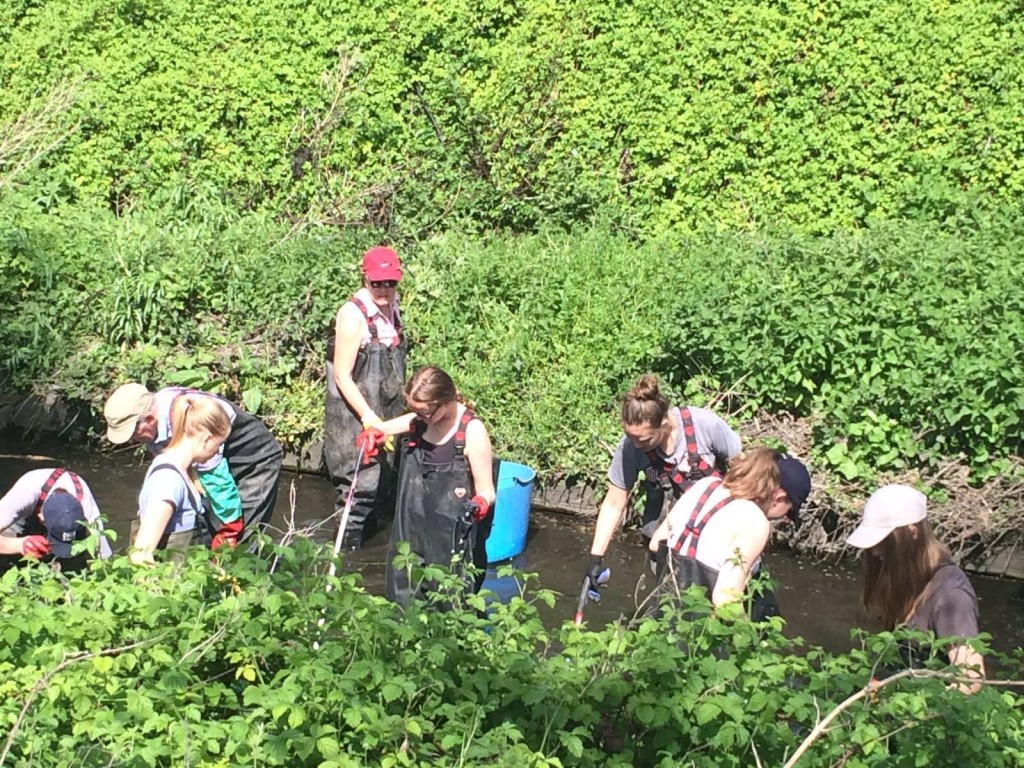 By lunch time everyone was very hot and relieved to find a bit of shade from the hot sun. We sat around eating our lunches and drinking water, marvelling at the traffic chaos that was happening in the park. Car after car had turned up for a day in the sun only to result in a grid local down the narrow Church Road.

After lunch, the wading team heading further into the park and found another trolley, some traffic cones and a pot of paint. 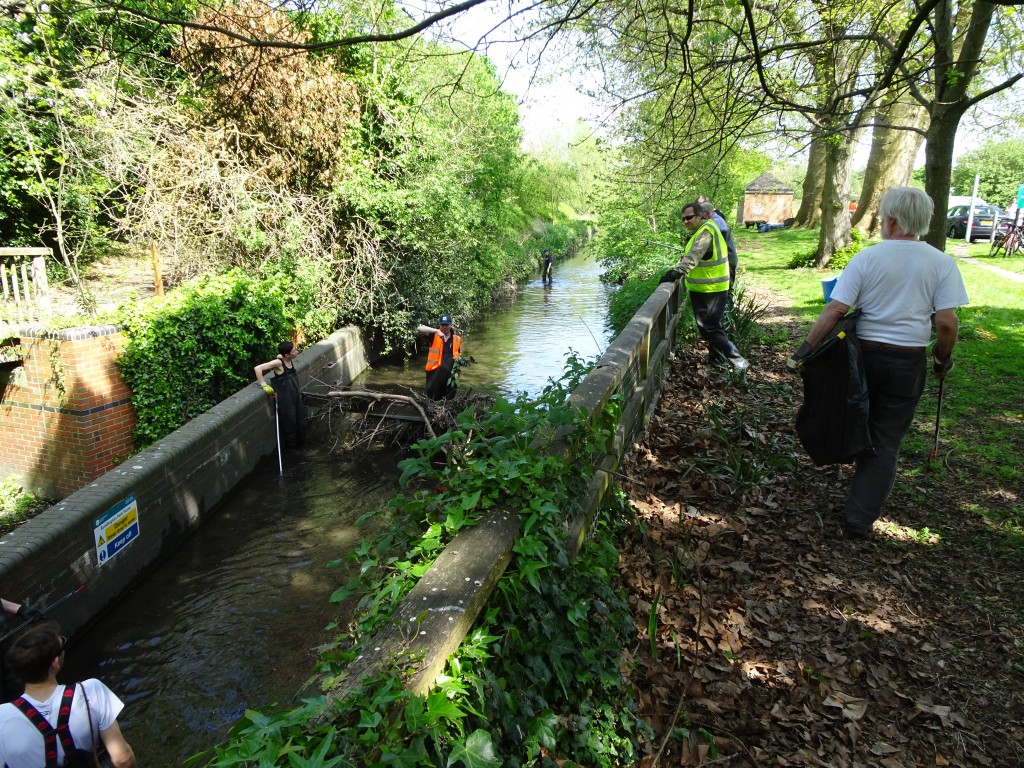 After this though, the river was very clear and for once we felt like what we were doing was making a difference.

The balsam bashing team continued to tackle the wetland areas within the park, making sure every last plant was discovered and pulled up. 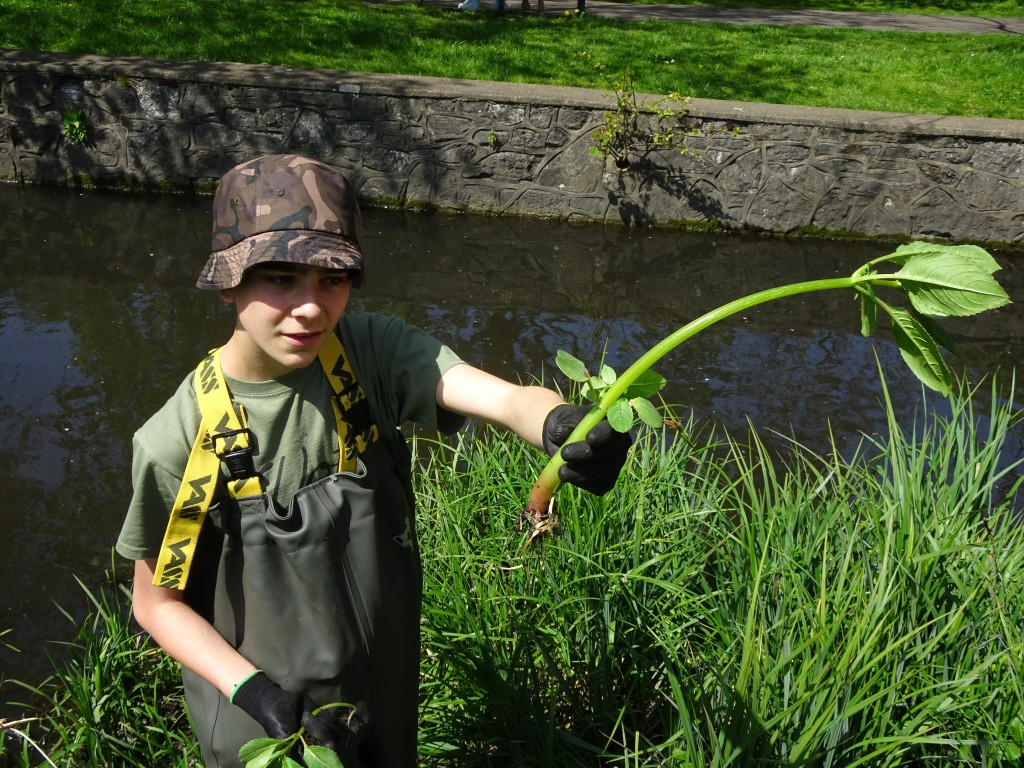 Finally after a long day in the sun, we packed up the van and all joined the traffic jam awaiting us trying to get down Church Road. What a palaver!

So what did we find?  1 bucket, 1 cage front, 1 dismantled tent and wire, 1 saucepan (thought this might be a good addition to my new flat), 1 pot of paint, 2 trolleys, 2 road work signs, 3 disposable BBQs, 5 traffic cones, 6 panels of metal fencing, 15 planks of wood and 20 bags of other junk. Plus all the tiny, tiny balsam plants….

Huge thanks to the Living Wandle Landscape Partnership for funding the event as part of the River Guardians projects, everyone who helped unpack and pack up the van during the event, Rosie & Dave for supervising the Event Tent, Theo & Alan for helping supervise the balsam bashing, John, Chris and Wally for helping to supervise the waders and the Parks Team at Sutton Council for organising collection of all the rubbish the next day.

So what did I learn from this month’s cleanup?   That Beddington Park is the beach of South London on a hot summer’s day. 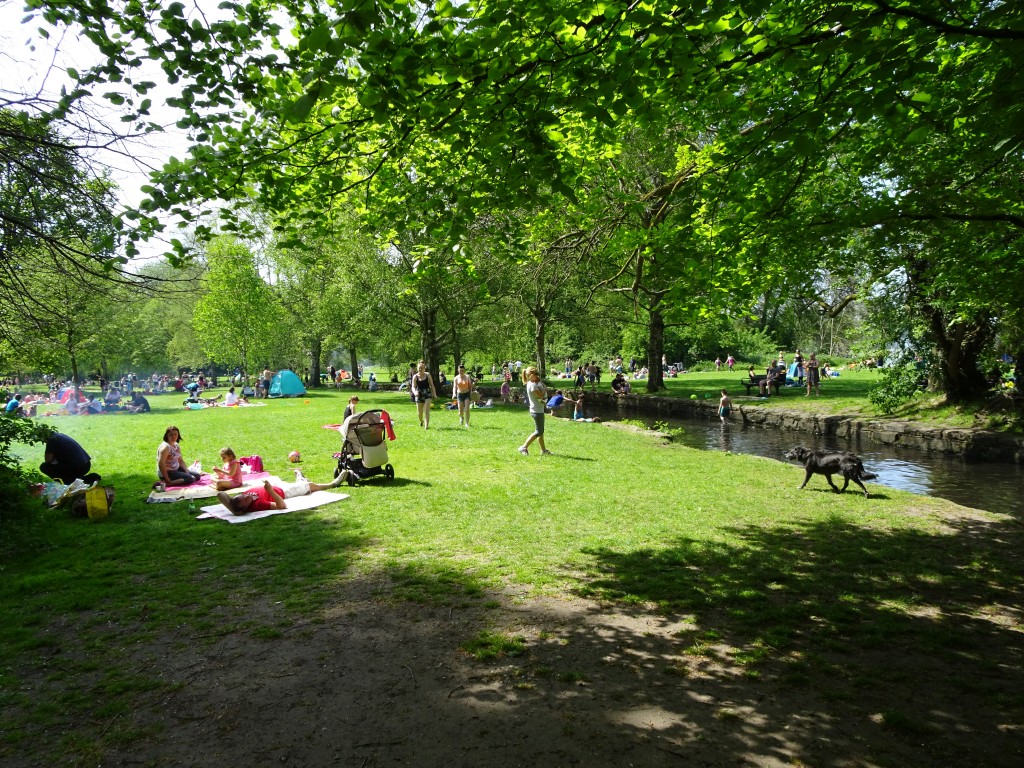