The one with the two minute silence

On a bright and surprisingly warm Remembrance Day morning, we gathered at the side of the Wandle Trail half way between Trewint Street and Plough Lane to tackle another stretch of the Wandle we hadn’t cleaned up before.

We worked very hard to get Gazebo HQ and all the kit ready so that we could stop our setting up activities at precisely 11 o’clock to observe the two minute silence, listening to Big Ben tolling the hour on Theo and Sally’s eco-friendly, wind-up radio. 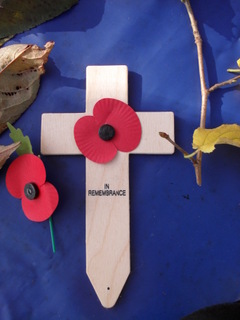 All told, 58 volunteers, including 3 small ones, came to help, and we needed every pair of hands, as literally tons of rubbish came out of the water.  A lot of it was metal – rebars, scaffolding poles and a rather terrifying anti-climb fence collar which looked like a horribly appropriate instrument of trench warfare or mediaeval torture … 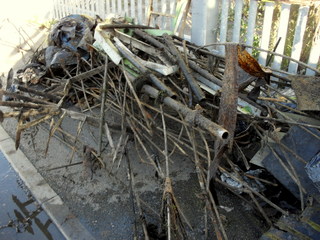 … along with a few light-relief comedy items such as a plastic palm tree and (yet another) upper set of false teeth: 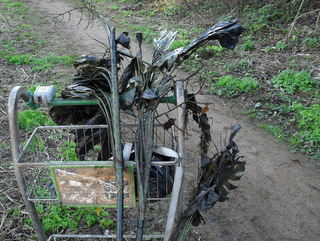 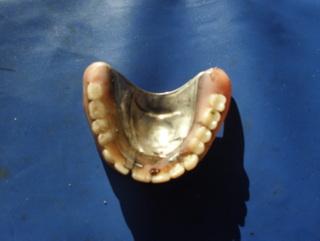 Hugh with sons Jack and Ted, Alex with daughter Beatrice and other land-based volunteers picked up lots of litter from the side of the Wandle Trail, particularly dozens of cans which were piled up in the bushes.

Amongst the new faces was Luke who had heard about the Wandle Trust cleanups at the 1st North Wallington Scout group – and had negotiated persistently with his mother to bring him! He was a terrific help, pulling all the rubbish up the bank and running along the trail to fetch ropes, grapples and tools as and when needed. 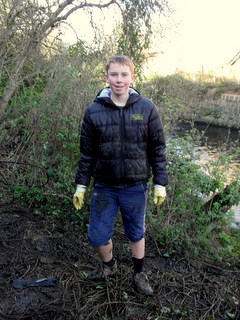 When we stopped at about 1pm to re-energise, Sally and Jo produced tea, coffee, pumpkin and squash soup accompanied by crusty bread and 3 kinds of cake. And Rob brought along some delicious cinnamon whirls for everyone to enjoy too!

Suitably refreshed, we went back to the task in hand; sopping piles of rubbish were heaped into wheelbarrows, trugs and half barrels, while the two flat bed trolleys trundled up and down the trail loaded with drainpipes and other bits of detritus: 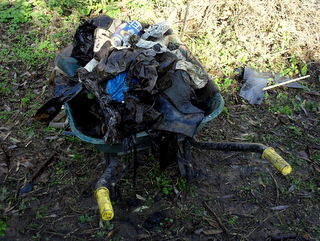 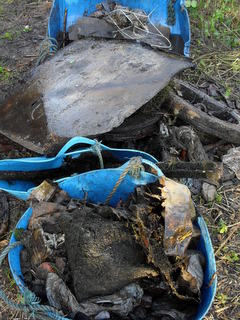 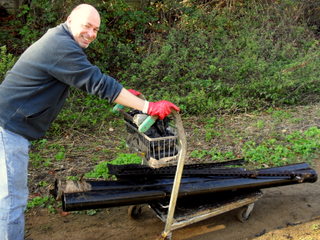 Just as we decided to call it a day, the guys found a huge grating cover which they felt they couldn’t leave in the river… 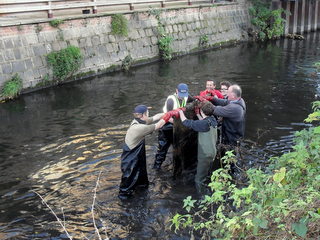 … so they manhandled it to the bank where lots of muscle power on the end of a rope was needed to haul it up the bank. 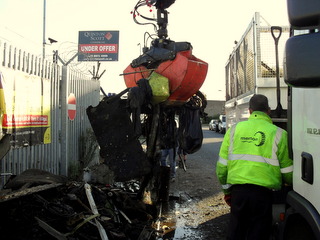 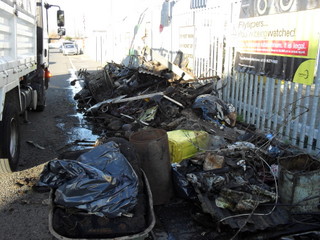 Once the lorry was full, he departed, and as we were packing all our kit away he returned a second time for the next load, telling us that he would continue to come back until it was all cleared away.

With scaffolding poles and an exhaust pipe sticking out from the bucket, the rubbish looked like some kind of contemporary sculpture.  Not quite ‘B of the bang’, but maybe ‘J of the junk’? 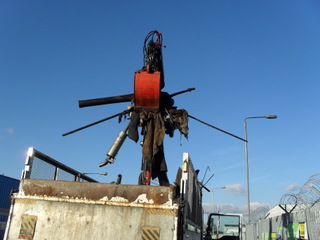 We’re grateful, as always, to Tony of Merton Council’s Waste Management Team who organised collection of the rubbish.