The one without the gas – almost!

This October I ran my first Wandle Trust cleanup – without Erica! Despite her efforts to prepare me, I still managed to forget a few key pieces of equipment – including the gas for the boiler. Luckily, we were close to our garage in Battersea so I nipped back, rescued the gas and got the cleanup started after our usual Health & Safety briefing.

So where were we this month? For October we found ourselves in the Borough of Wandsworth, working on the Wandle as it ran along the back of King George’s Park in Earlsfield.  We were delighted to welcome Colin and Adele Brown of local estate agents, Seymour Green, who were kindly supporting this event. 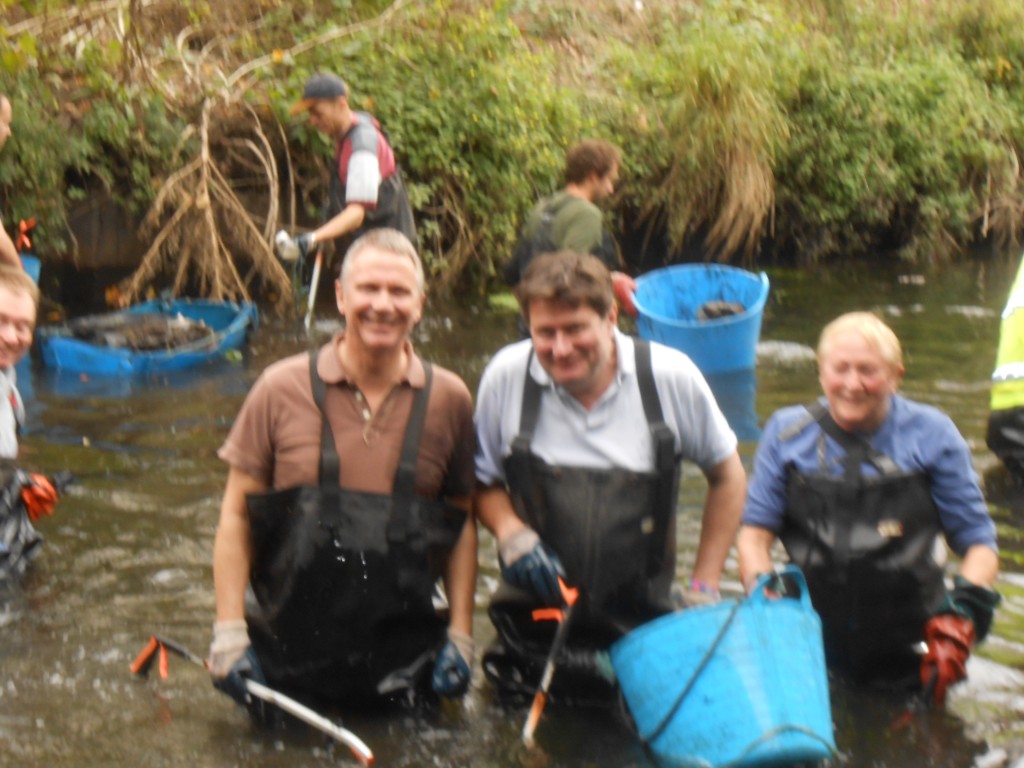 We divided into two teams – waders and litter pickers. Our waders all got kitted out and hopped in the river, working upstream along a 150m stretch of the Wandle. Very early on we got our first “intriguing” find – an inflatable bra! 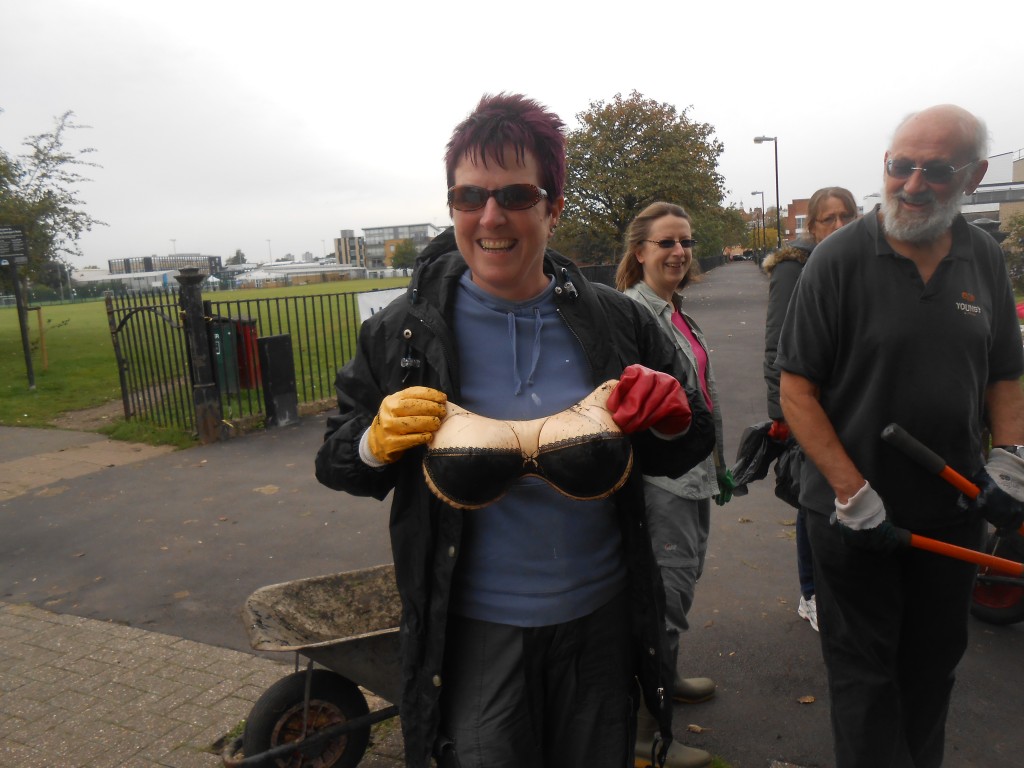 This month we were joined by 20 students from the American International University in London, some of which were brave enough to give wading a go. Their bravery was soon rewarded as our wading team hauled their first trolley out from the Wandle’s depths. 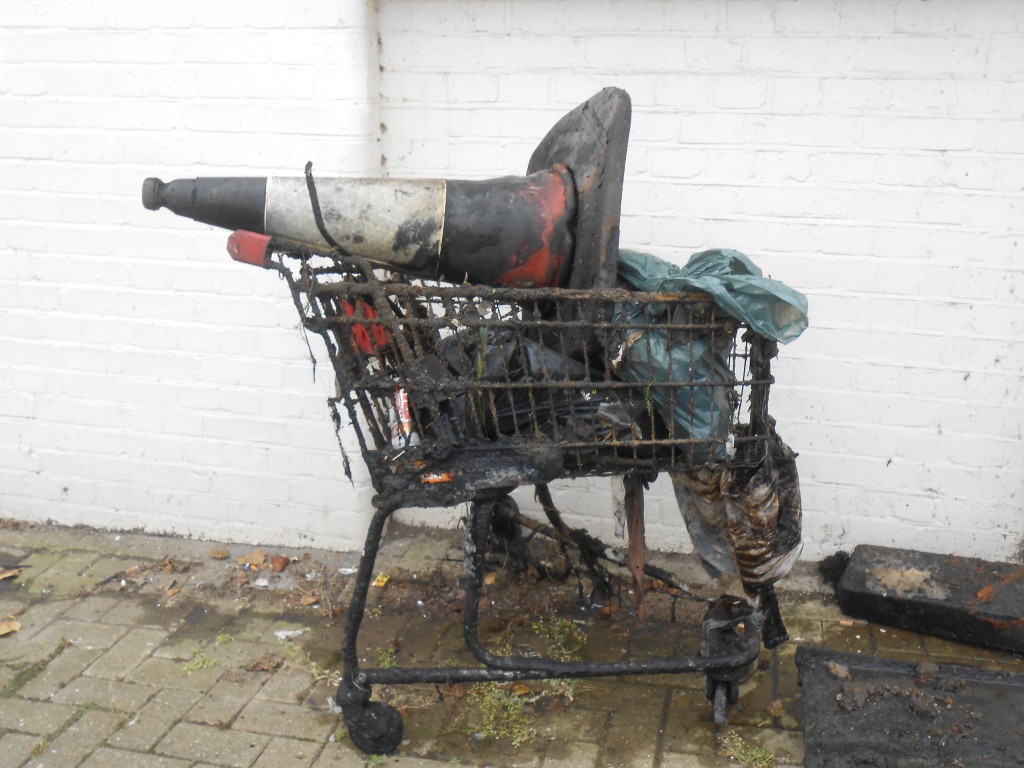 Our litter picking team had to battle through a forest of brambles, nettles and branches to get to the countless cans, bottles and crisp packets discarded on the banks of the Wandle. Thanks to their dedicated efforts, we cleared the bank downstream of our waders as well. The park has never looked cleaner!

After a morning of hard work, we were grateful to stop for a cup of tea and piece of cake, kindly supplied by Sally and Jana. We had a chocolate tray bake and some delicious apple and blackberry cupcakes. 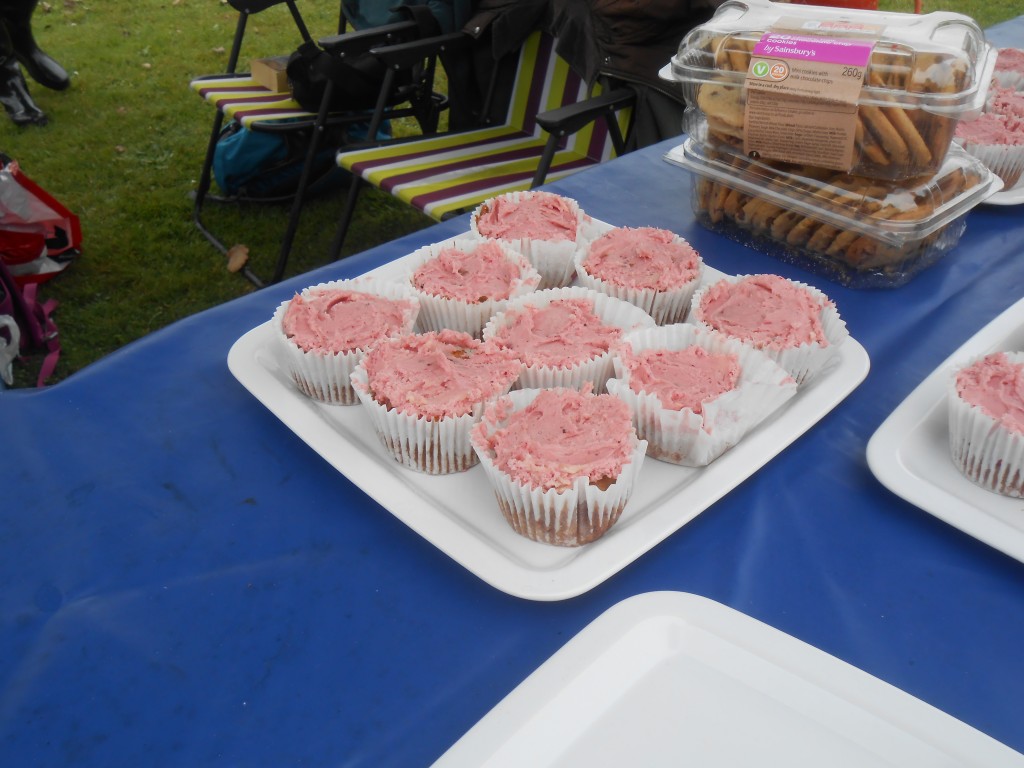 After lunch, our wading team thought they had hit the jackpot when an extremely heavy sealed suitcase was hauled out of the river. Discussions of pirate gold were thrown around (namely by myself) so we got a knife and opened our new find up only to find wood, not gold. We were only momentarily disappointed as we discovered an eel swimming inside the suitcase which we returned safely to the river, despite its protests! 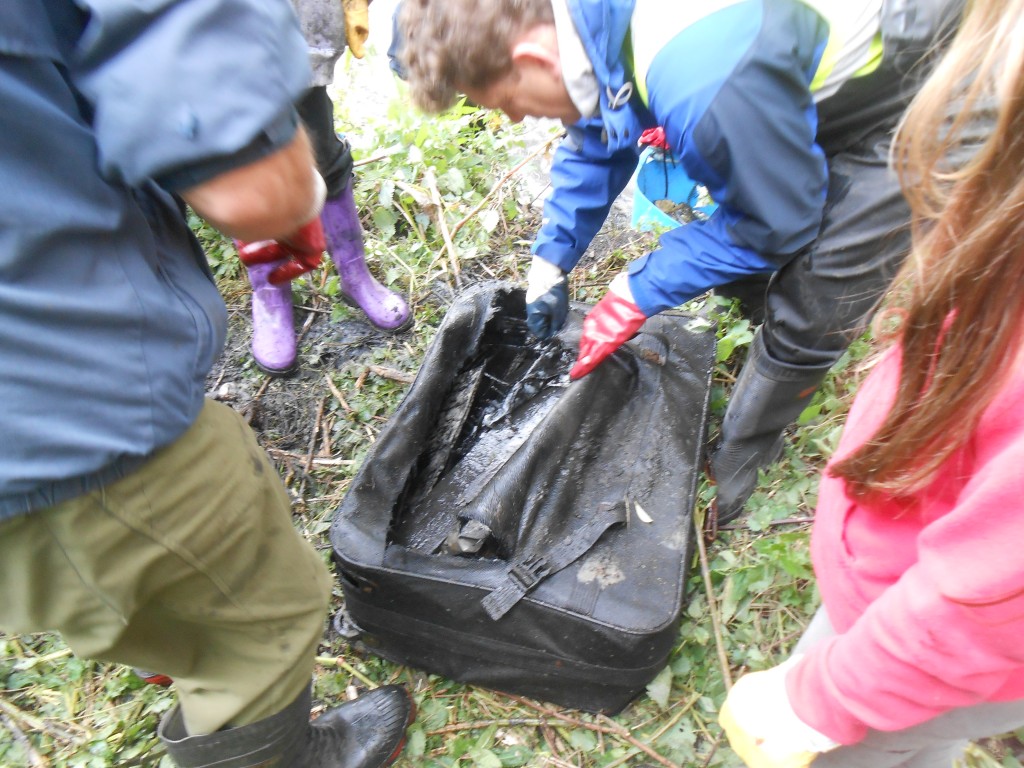 We also had some younger new arrivals join us after lunch who got stuck in straight away, helping haul the rubbish up from the river to the rubbish pile. There was great excitement as we pulled out another trolley from the Wandle and an entire car seat! 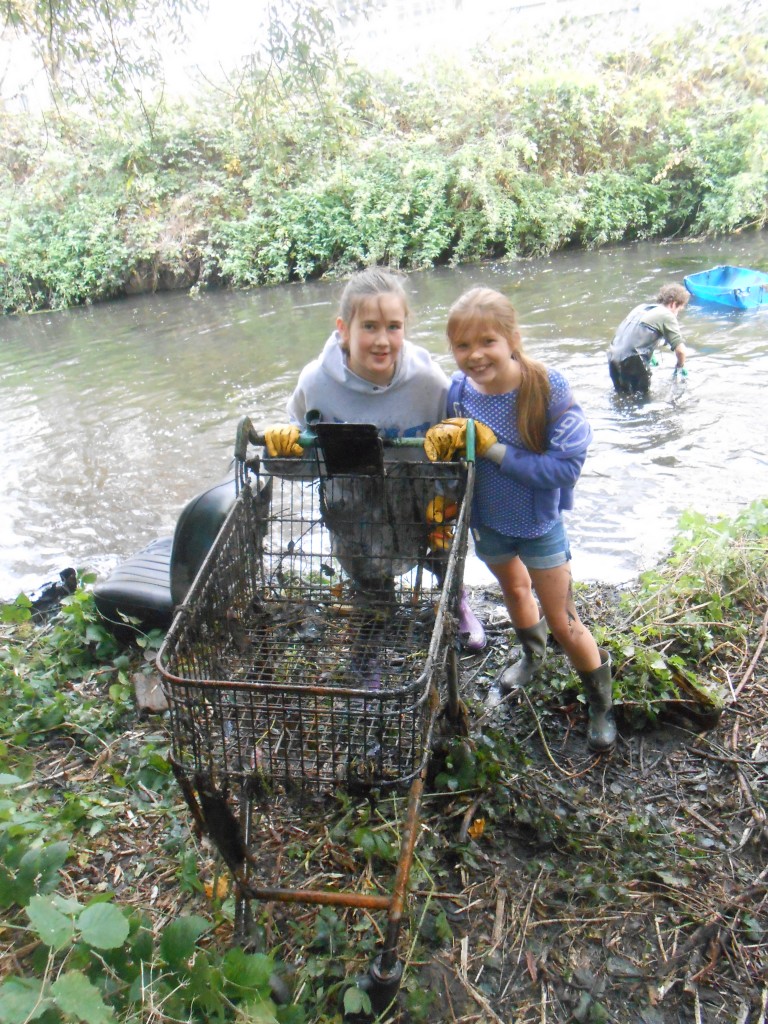 Terry arrived early for us, so we could load the rubbish straight onto the lorry. Our volunteers pushed wheelbarrow after wheelbarrow of rubbish back through the undergrowth of the Wandle banks. Some were even lucky enough to have a ride on the lorry’s lift system!

Huge thanks to: Michael and Gideon who helped me load and unload the van (and our star volunteers who helped us carry all the equipment back to the van); Sally & Jana for catering for 67 volunteers; Theo, Michael, Gideon and John for helping supervise the day and to Joanna and Michael of Wandsworth Waste Management Team for organising collection of all the rubbish and to Terry who turned up with the lorry on the day.

So what did I learn from my first cleanup? Well, I don’t think I will ever forget the gas or crow bars again! But more importantly, people along the Wandle have expensive tastes – champagne anyone? 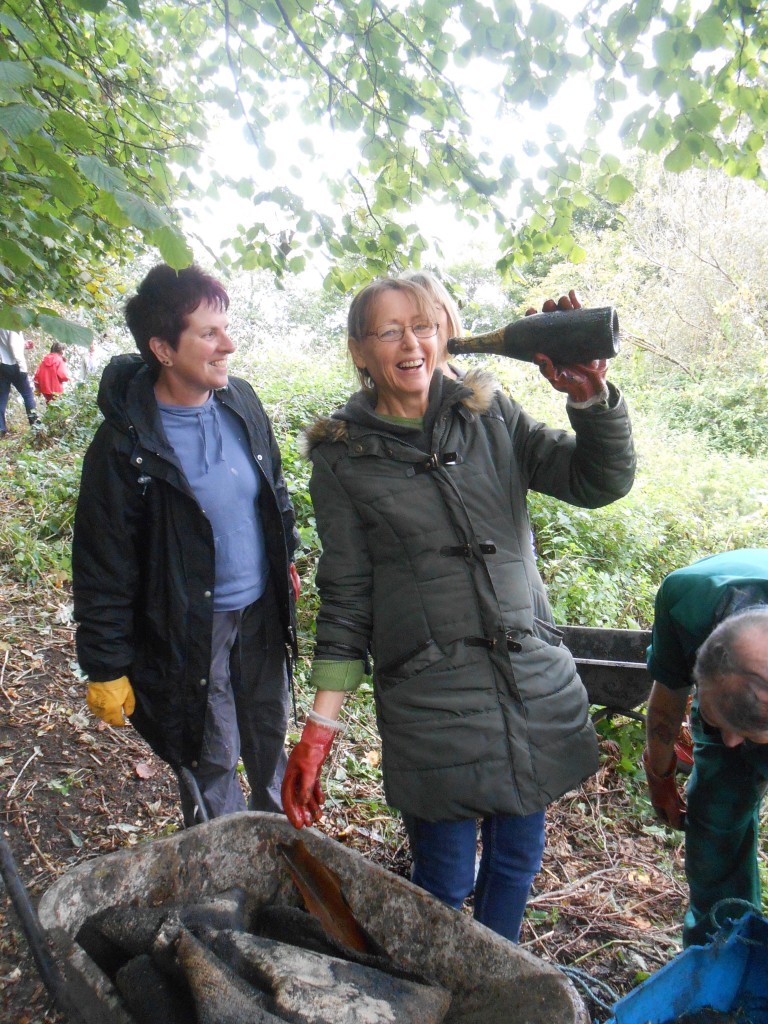