September saw us in glorious sunshine on the pretty stretch of the Wandle in Ravensbury Park.  A wide variety of items were found, including piles of IKEA catalogues which appear to have been dumped rather than delivered. 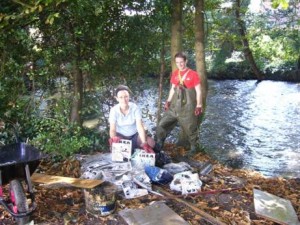 Whilst there was plenty of rubbish to collect on the banks there were also some challenges in the river itself.  Mark, Nick, Rob and Felix weren’t quite sure what they were pulling up here. 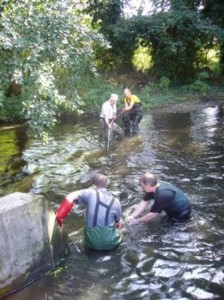 But their best guess was right and their not inconsiderable efforts were rewarded with a shopping trolley! 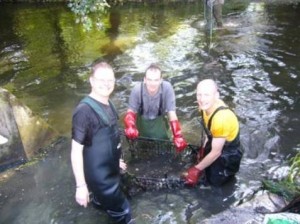 The new wheelbarrow proved invaluable in transporting the rubbish to the growing pile at the park entrance.  Most of us retired to the Burn Bullock pub afterwards for a well deserved pint or two.

Thanks to all our volunteers: Diana, Felix, Freya, Gideon, Gill, Ion, Jane, Mark B, Mark W, Mike, Nick, Niki, Peter M, Peter T, Rigby, Rob, Ron, Tim, Ursula and Erica for the use of her car!