The one with the combined action of a group of people, especially when effective and efficient  (that’s teamwork!)

On a bright, fresh early autumn day, with only a few scattered showers predicted, we returned to Ravensbury Park to clear the river of rubbish and to help the Friends of Ravensbury Park tackle the floating pennywort in the lake.

Among our 48 volunteers were 12 young people from the Challenge Network who, as well as taking part in other activities over the Summer, have been learning about the work of the Wandle Trust and raising money for us. 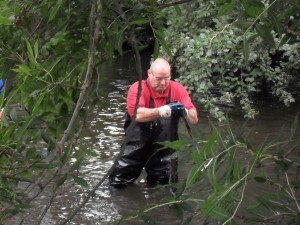 … the other group, most of whom had removed floating pennywort before, got into the lake. 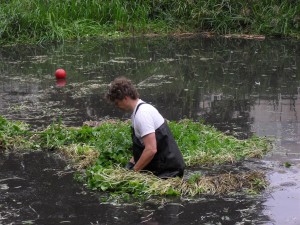 Using the ‘cut and roll’ technique carried out at previous cleanups, the pennywort was pushed or raked to the platform and then dragged out and loaded onto wheelbarrows.  Our volunteers took barrow… 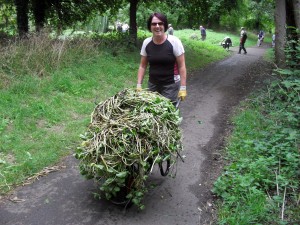 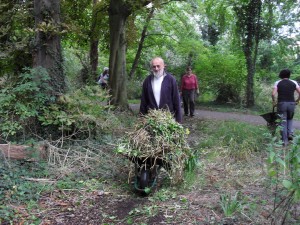 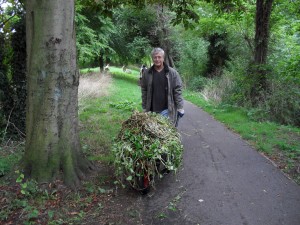 of pennywort away from the lake, piling it under the trees where it will rot down.  Within a week or two, there will be no trace of it! 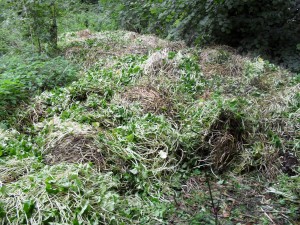 Robin particularly enjoyed the experience, launching himself airborne in a sky diving position and landing on a great swathe of floating pennywort – it held his weight though, so tightly woven were the stems and leaves. 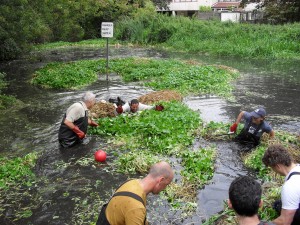 In the meantime, Theo and several other volunteers scouted round the edge of the park via the back channel, and retrieved several items of rubbish including a paddling pool from the area where our rock ramp fish pass had previously been installed. Had someone tried to use it as a log flume?

Wet and filthy, we returned to the gazebo where Sally and Jo had produced some delicious food for our annual picnic – our way of saying thank you to all our hard working volunteers.  On the menu was bacon and egg pie, as well as a veggie version, chicken and sausages, pearl barley salad and a berry pudding. 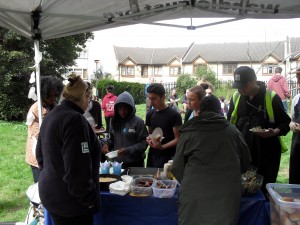 Local artist Hana Horack had turned up by then too, and not only encouraged everyone to have a go at painting contributions to her art project, but had also brought a lovely sticky sponge for us too. 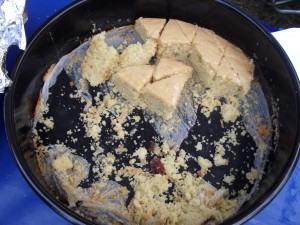 Needless to say, there wasn’t much left at the end. 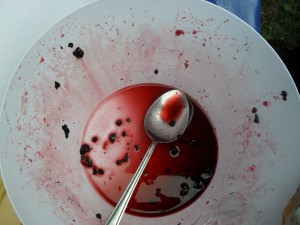 Finally, Stan from Merton Council’s waste management team arrived and loaded up his truck with all the rubbish.  Our thanks to him, and Tony for organising collection of it.

Thank you to Charles and Gideon who helped unload all the kit back at the garage.