2,000 visitors were predicted to attend the Wandle Park Revival event on Saturday 6 July, but the lovely weather attracted over 7,000 people and the Wandle Trust was there too, appropriately located right next to the river!  Dozens of interested people stopped by to ask questions and share reminiscences of their childhood in the park before the river was buried in a concrete pipe, and we chatted to young and old alike and handed out lots of copies of the Wandle vision document. 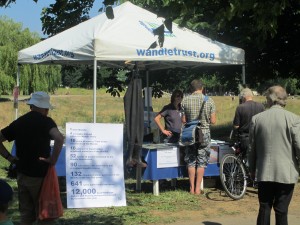 Meanwhile, moustachioed gentlemen in top hats rode penny farthings along the footpaths to the sound of a harmonica and percussion from a traditional one man band, 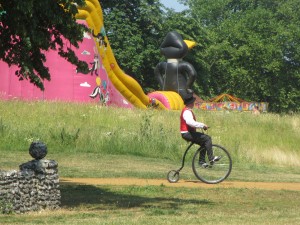 and as the sun rose higher in the sky, children and dogs automatically gravitated towards the water for a paddle. 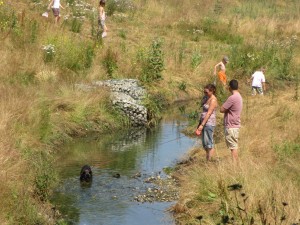 Following Croydon Council’s £3.5million transformation of the 123-year-old park that has returned the River Wandle to the surface for the first time in 40 years, the park’s Victorian splendour has been brought back to life and a host of new and improved facilities have been created.

The three year scheme, made possible by the Heritage Lottery Fund (HLF) and Big Lottery Fund (BIG) Parks for People programme, has also restored the bandstand, water-fountain, ornamental planting and boating lake, plus created a new skate park, ball court, open-air gym, pavilion and community garden, all set against the backdrop of the Wandle. 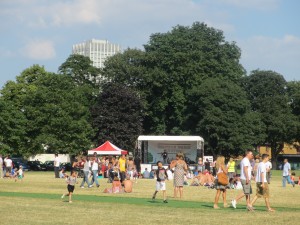 Some 50 stalls and stages provided a wealth of entertainment for the crowds, and during the day three plaques were unveiled at the new bandstand by The Mayor of Croydon, senior Croydon councillors and Wesley Kerr of the Heritage Lottery Fund (HLF), which provided £1.9m towards the project. The scheme was also supported by £400,000 from Mayor of London Boris Johnson’s Help a London Park scheme, Croydon Council’s ‘Parks to be Proud of’ initiative, and Barratt Homes as part of their neighbouring New South Quarter housing development.