Whichever way you look at it, the River Wandle has had a tough week – with one pollution scare rapidly followed by another that proved much worse.

But amidst all the phone calls and urgent investigations, we’ve still been cheered by good news for the green spaces around the river.

First came welcome news that Sutton Council has signed up to creating the Wandle Valley Regional Park – a long-term vision for an 8,000-acre green corridor along the full length of the Wandle, with many benefits for biodiversity, local people’s quality of life, and even the economy.

Many of our project partners in the Wandle Forum – particularly Groundwork – have worked tirelessly to reach this stage of the process, and we’re thrilled to see the plans achieving real progress and publicity.

Better still, the Mayor of London has just announced the results of the Help a London Park vote (captioned “You vote, we makeover”) with a £400,000 win for Wandle Park in Croydon. 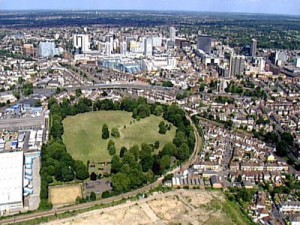 As a result, the dedicated Friends of Wandle Park can now push forward with plans to break the river out of its deep concrete culvert under the park.

This news couldn’t be better for an area of the Wandle catchment that’s had a lot of airtime on this blog recently (and with good, barely-suppressed-angry, polluted reason).  The more of the Wandle we can all bring back to Croydon, the better we can keep an eye on it… and the healthier we hope it will be.

Trout in the Classroom being released by local kids in Wandle Park, where there’s currently no river at all?