We are now three weeks into the removal of two weirs on the Hogsmill as it flows through the Hogsmill Local Nature Reserve, Ewell. The weather could not have been better for this project. With barely a drop of rain over this period with the dry spell set to continue this week, ground and river conditions have allowed our contractors Land & Water to crack on at a great pace.

The downstream weir, or Mystery weir as it is affectionately known, is nearing completion with all concrete and stone work removed from site. The banks have been lowered, re-profiled and protected with two different techniques, one on each bank. The first, which has been installed on the more isolated bank, is a traditional brash bundle (faggot) approach created from material won by the tree works that have taken place (foreground in the photos below). Behind these is a line of coir matting to prevent wash-out before the banks have vegetated and are self supporting. 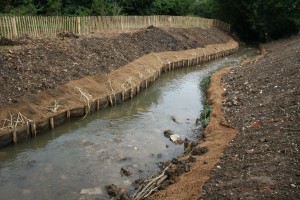 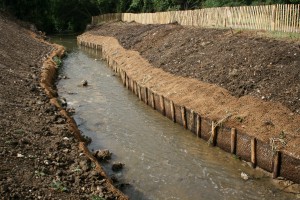 On the other bank, which is subject to more footfall due to the nearby public footpath, a more robust technique is being implemented. This involves a three layer method of a polysester Geogrid on the front face with a coir matting acting as the sandwich filling with a geotextile behind, again to prevent washout (far bank in photos).

The upstream weir is coming on leaps and bounds. With significantly less space in the vicinity, work for the guys on site has been a little more convoluted but none-the-less progress is looking great. The brash bundle approach on the far bank is nearing completion and then work on the near bank can commence. 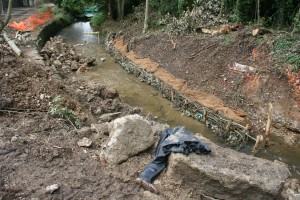 Work on the upstream weir.

The project has also had an interesting historical twist. Being aware that historic gunpowder mills may be in the  area, we had contacted Epsom & Ewell Historical and Archaeological Society in advance. Sure enough, at the first weir the brick remains have been uncovered. Steven Nelson keenly came out to look into the findings equipped with trowel. He has dated them back to circa 1700-1750 and believes that the walls form what would have been the ‘incorporating’ house where the powder was ground before sending to other installations for further processing. 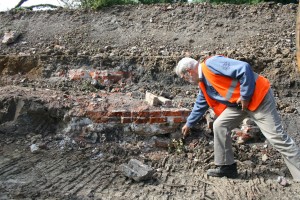 Investigating the uncovered brick walls of the gunpowder mill.

Then, on the upstream weir a further structure was uncovered. This time Steven believes that it is the remains of a Corning Mill building. The remains of this will be left on view as a reminder of the history of the river. 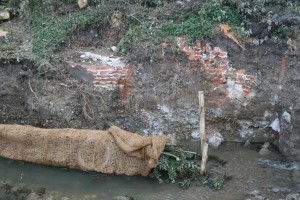 The remains of the Corning Mill which have lain forgotten behind the abutment walls of the upstream weir.

So work will continue this week which, all things going to plan, should see most of the work completed, including the introduction of the gravels which will form riffles and spawning habitat.

Once again a big thanks to the continued hard work of all the guys at Land & Water who are doing a first class job.

1 thought on “Weir removals on the Hogsmill (part 2)”