In June we reported the news that the River Wandle had won the lottery! This triumph was a £2 million award from the Heritage Lottery Fund’s Landscape Partnership Scheme involving 25 projects to be delivered by a whole host of organisations on the Wandle. 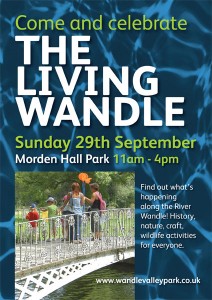 The project is going to be ‘launched’ on World Rivers Day – Sunday 29th September 2013 – at Morden Hall Park. All the organisations involved will be there to tell you about the exciting projects that are coming up over the next 4 years.

The Wandle Trust will be leading on 4 projects – A river education programme for schools, a pollution awareness project called ‘River Guardians’, some physical river restoration work which will build on the enhancements already being delivered and a project called ‘Discover the Source of the Wandle’ through which we’ll investigate local features and landscape as well as archived records to look for signs of where the Wandle starts flowing.

Further details on the event, including the event booklet, can be found here.

So come and join us at Morden Hall Park on World Rivers Day and hear about these and other projects (including an invasive species programme, oral history and community theatre projects and the opening up of Merton Priory’s Chapter House). The Wandle Piscators will also be at Merton Abbey Mills that day with a range of activities so why not take a Sunday stroll along the Wandle between Morden Hall Park and Merton Abbey Mills and join thousands of others around the world appreciating their local river on World Rivers Day!